Home Rangers Robbed of Four in a Row 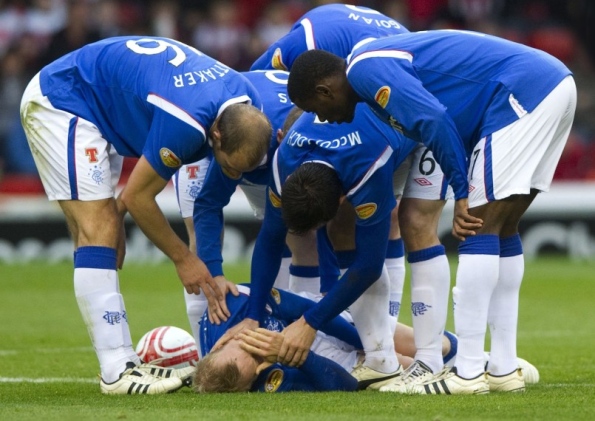 ‘Robbed’. It is a slightly tabloid word, and maybe even over-emotional, but I cannot shake off the feeling that Rangers have been nigh-on cheated out of our fourth league title in a row. Even if we do not wish to descend to ‘lower levels’ by saying ‘cheated’, circumstances this past season certainly have not been fair and it has been an extremely uneven playing field which ultimately effectively gifted Celtic the league.
It has been a domino effect which can be traced back to the 29th of October 2011 and a trip to Pittodrie. Having not conceded a single goal on our travels, and while dispatching Celtic with ease at Ibrox to the tune of 4-2, the club was building up quite a lead at the top of the table, one which did not appear duly threatened by visiting the Granite City. During this match, the side led 2-0, including a stunning Lafferty goal and a clinical Jelavic penalty. The perfect defensive record was over though, due to a speculative long-range drive from Aberdeen captain Richard Foster, fumbled carelessly into his own net by Allan McGregor. The worst part of the day though, had been the innocuous-looking injury to key winger Steven Naismith, one which saw the former Killie man stretchered off. This is where the house of cards began to collapse. Naismith, as testified previously in this blog, had been the most important cog of the Rangers machine, and now manager Ally McCoist had to preserve the form in his absence.

Predictably, results now started to become a little inconsistent. While the side had dropped 4 points (all at home) in 13 matches prior to Naismith’s injury, it dropped 2 more during a dismal match against St Johnstone at Ibrox, which a few weeks later were compounded by the first defeat (Kilmarnock) followed immediately by a subsequent second one (Celtic). The damage in January was minimal, just the one draw, but Celtic had completely closed the gap by this point and February would go down as a nightmare month in the eyes of our supporters.

That is all from a football point of view. What about the other side? Of course, as we all know, the club went into administration on the 15th of February, and were docked 10 points immediately. This pretty much put Celtic into an unassailable lead at the top.
However, it is worth discussing why we went into administration. Many supporters may be under the misconception it was due to schemes devised by Sir David Murray to save on tax – ‘Employee Benefit Trusts’ are an admittedly shady scheme designed to evade tax – an offshore account which helps with expensive transfer fees and wages. However, they are not actually illegal, merely dubious. David Gold, joint-chairman of English Championship side West Ham, recently stated on a ‘Special Report’ broadcast on Sky Sports News, that these trusts are not illegal and indeed are ‘legitimate’, although he had never used them. Nevertheless, through them Rangers had a £49M tax noose around their neck, later reported to have increased to £75M. This has been referred to as the ‘big tax case’.
There is also the matter of debt; while no longer controlled by Lloyds TSB, the debt of £18M was reportedly transferred to new owner Craig Whyte’s company Wavetower – so the debt still existed, it had just been placed in a darkened room among the questionable operations of Whyte, and was not an apparent threat.
So why the sudden plunge into administration? Well, the simple reason for the hasty appointment of administrators was to beat HMRC to it. Why? Because Craig Whyte had systematically set about retaining player income tax rather than forwarding it to the tax man. During his entire tenure, all players had paid income tax (PAYE) but the club, IE Craig Whyte, had not carried out the formal paperwork and submitted it to Her Maj. This led to a tax bill of £15M, and put simply the government wanted their cash.
So it was not EBT, it was not debt – it was Craig Whyte’s deliberate retention of club income tax. That is why the club is in administration. Did he do this deliberately to force administration? It is difficult to think of any alternative plausible reason. The only other one was him trying to simply thieve the cash for himself. But surely even he would know HMRC would catch up eventually. As did the administrators.

The court case for the £3.6M seized from Collyer Bristow starts at the end of the month – the origin of this cash not being entirely clear as to whether it is PAYE tax, the Ticketus season ticket cash or something else. It was also expected that far more would be found in the accounts of Whyte’s lawyers, in the region of £9.5M, but just over £3.5M was there.

Has Whyte been stealing from Rangers? The truth is we probably will never know. But administration was not, as many have suggested, inevitable. It was forced upon us due to the operations of our owner.
However, most of this has been expressed already. My intention for this blog was to focus on my personal anger at my club being robbed of a fourth title in a row due to this and other factors. It was highlighted during cup weekend, when Kilmarnock convincingly dispatched Celtic to claim their first trophy for well over a decade. That the side from Rugby Park made Celtic look what they really are, ordinary, which shows how incredibly frustrating that the ‘second best’ side in Scotland will win the league. I hope they enjoy their jelly and ice cream, because it has been delivered free to them.
Yesterday’s convincing triumph (despite a late wobble) at Ibrox over our arch-rivals showed how much better Rangers are than Celtic – the hunger, the desire, and no lack of ability was as irritating as it was joyous. Fantastic to see such a great display, amusing to witness the visitors lose the plot and have 3 men sent off, including their ‘wonderful’ manager, but hollow to consider how that shower will win the league despite being second best.

I never much took to the ‘tainted’ title cliché, but I can understand it. This will not be a league Celtic have earned – it has been gifted to them.

In the interest of fairness I can point to the fact they did go on an unbeaten run of 17 matches (before losing to Kilmarnock then Rangers in quick succession), so they are not a completely hopeless outfit – but they have been given more than a boost, a helping hand, by abysmal circumstances surrounding Ibrox.
This will be the first time I can recall that the league table will lie.