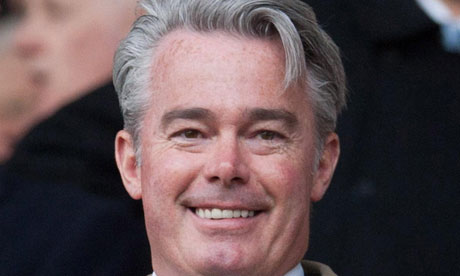 The battle to own Rangers Football Club seriously heated up on Friday. Administrators Duff & Phelps confirmed three concrete bids had been received on their stated deadline, with one more supposedly imminent over the weekend.
The 3 publicised interested parties are ‘The Blue Knights’, headed by Paul Murray, rugby primo Brian Kennedy, and a Chicago-based consortium possibly called ‘Club 9 Sports’. The belated bid is alleged to be from Singapore headed by Glasgow businessman Shazad Bakhsh.
So, what do we know about the definite bids, and those behind them?
We should start with the highest profile courting, that of Paul Murray’s ‘Blue Knights’. Headed by the former director Murray, the Knights are formed by John Bennett, Scott Murdoch, and probably the best known member outwith Murray, Donald Park. They also have the backing of current Rangers board member and second highest shareholder Dave King, and former manager Walter Smith has also provided his influential endorsement of their plan. Murray said:
“As I have said before, there is room for anyone else who wishes to step forward. We need individuals with money and ideas who can help move Rangers forward.”
So clearly this consortium is not finalised and there are a number of loose ends to be tied up, although their intentions are clear and they have ambitions for the club. On the flip side, there are a number of issues with the Blue Knight proposal.
Firstly it is not a unanimous choice among Rangers fans. A recent poll on fansite RangersMedia.com revealed that out of 326 responses, 214 were against their takeover bid entirely: RM poll. On Gersnet.co.uk out of 27 votes, only 4 backed the Knights: Gersnet poll. Rangers fans are at absolute best divided by Murray’s takeover attempt, and at worst significantly against it.
Secondly, Paul Murray has arguably had his chance to own Rangers, and save the club from the peril eventual owner Craig Whyte plunged it into. Murray was linked for years, and certainly produced a number of media quotes which did not dispel his interest, but he did not provide a concrete bid. Now the club is in the pit of despair he returns, a ‘Blue Knight’ in shining armour; his procrastination has not endeared him to supporters.
Thirdly is the association with controversial Rangers supporters’ group, the Rangers Supporters’ Trust. Headed by the boss of the largest Rangers fansite Followfollow.com, Mark Dingwall, the RST has a colourful reputation among supporters – some vehemently oppose it and attempt to discredit it entirely, while others point to the good work they believe it does in the name of the club. Whatever side you are on, the RST’s endorsement of the Blue Knights is not without baggage. Of course, other Rangers supporters’ groups such as the Assembly also back the Knights, with president Andy Kerr throwing his weight behind the proposal – but the RST is by far the best known and highest profile.
Lastly is the issue of being tarred by a brush. Murray and King were/are part of these previous destructive regimes which have brought the club to its knees, and appear to have done no good in rectifying the downward spiral. King did, to his immense credit, invest £20M in the club around 2000, but subsequently blotted his copybook by stating factually that ‘liquidation was inevitable’. And, like Murray, did not outwardly oppose the irresponsible running of the club. Do we really want Paul Murray now in full control of the club, albeit the head of a consortium?
Moving on, at last, to the second bid, and it comes from the owner of English rugby league side Sale Sharks. Brian Kennedy is the individual in question, but unlike the previous bid, Kennedy has no personal interest in the club. Indeed, his position is that he is a ‘plan b’ should no other adequate bid be received:
“I don’t really want to buy the club, but I don’t want to see Rangers die.”
His family are Rangers fans, but he personally is not, and while he clearly would run the club well enough given the relative health of his other endeavours, he would be a case of being the fall-back crutch – the football equivalent of no one else in a company being sufficient to carry out a difficult task, so Kennedy gets ‘lumbered’ with it. Noble, perhaps, but surely not a long-term solution.
The last bid is the least reported. A Chicago-based consortium allegedly called Club 9 Sports. They submitted a failed bid for English side Sheffield Wednesday in 2010, but the Chicago outfit are barely known in Britain, and its bid for the Owls did not end well with chief executive Nick Parker dismissing it on the basis of Club 9 charging £420,000 per year in management fees.

“The board made it very clear to them last Friday that their offer was wholly unacceptable to both us and the bank.”

This pattern was repeated in 2011 with a failed bid for Tranmere Rovers with chairman Peter Johnson saying:
“I’d like to thank Club 9 Sports for their interest in Tranmere Rovers but we have been unable to reach agreement. As chairman of the club I am looking forward to the forthcoming season.”
So they hardly have previous for successful ownership of UK football teams.
So, what conclusions can we arrive at, having focused on each bid? The most obvious one is none of these bids are entirely suitable and unanimously acceptable. Rangers fans sadly have to accept that no Russian billionaire with spare time and money is going to bail the club out. Likewise no super-rich Arabian oil company is going to pour cash into Ibrox like a plaything. This is no bad thing, given both of these lack stability long-term. But the options we have so far are not each without fault. Whoever does win this battle will have a lot of work to do to convince supporters they are the right option.
After having our fingers burned by a Whyte Knight, we no longer wish to be pawns in any game.