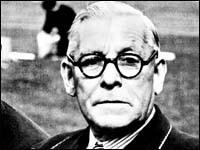 Bill Struth’s immortal ‘We Welcome the Chase’ has been repeated throughout the history of Rangers FC to the point of cliché. It described a glorious club at the top of its game, which commanded league title after league title, and with more than a hint of confidence welcomed any challenger to rise and compete. 18 league championships in all under his regime certainly qualified such a comment.
However, Ally McCoist has produced an equally powerful statement, one which reflects the very opposite spectrum of Struth’s sentiment. Super Ally said, very simply:
“We don’t do walking away.”
Struth’s time was one of glory, and his epigram reflected that. Alistair’s time at Ibrox has been more difficult, to say the least, and of course recent events have threatened the very future of the club. Being put in administration is the lowest point in a club’s history, with the running of the establishment taken out of the board’s hands and into those of appointed administrators who scrutinise the books and accounts and focus on every way they can to save the club money and rectify the bleeding.
Despite this, Ally represents the club – he is the manager, the boss, and to put it mildly, his conduct and dignity during these unfathomably tough times have been thoroughly inspirational. When asked by Sky Sports’ Gerry McCulloch if he ever considered walking away, his response was one to raise the hairs on the back of the neck:
“Not at all, this is my club, the same as it is for thousands and thousands of Rangers supporters. We don’t do walking away.”
McCoist has never held himself with anything other than the highest of integrity, clearly under the wise tutelage of the Grand Master Walter Smith. It was once said that there was no one better to guide Rangers through the dark days of the fallout from Paul le Guen’s disastrous regime than The Gaffer; it could equally now be said that his protégé has come into his own entirely, and is guiding this troubled club through something far more difficult than Smith ever had to cope with.
It has been a time of fear, uncertainty, cutbacks, and the constant threat of the club disappearing from existence. The story has been so high profile even Conservative Prime Minister David Cameron and Scotland’s First Minister Alex Salmond have vocally supported the club, expressing its importance on so many levels and their deep-rooted hope that this dire situation can be resolved. Salmond went so far as to express the importance of Rangers, not only culturally and within their own right, but the ramifications of their disappearance to cross-city rivals Celtic. The First Minister was completely correct in his comments, that Celtic need Rangers. Naturally, the rather skewed PR efforts from the green and white chunk of the Old Firm denied this entirely.
During this maelstrom though, McCoist has constantly reassured supporters, inspired us, and committed himself as a true Bear to the cause of sticking with this stricken ship, which badly needs holes plugged. He also managed to express a sense of perspective relating to the current plight:
“It’s probably as low as it has been. Having said that, we’ve had disasters at this football club, in 1902, ’61 and ’71 and people have lost their lives which in the grand scheme of things puts everything into perspective.”
The manager is spot on – these current times are dreadful, but nothing can compare to dozens and dozens of lives lost in the past, and to that extent, we must compose ourselves and be thankful for what we do have. And if Ally’s rallying calls continue to have the effect they currently are, we will have a thriving club once again which believes in its manager and its players. For all the managerial hiccups McCoist has undeniably had on the pitch during his short tenure, his guidance and leadership during the worst period in the club’s history since 1971 has been inspirational and remarkable.
And just recently, he has vocally demanded ‘answers’ from owner Craig Whyte regarding this situation:
“Well I have to inform you that I am as surprised at some of the revelations as the next man, of that there is no doubt. The one thing I would say to you is that I’m a Rangers supporter and I want some answers, I would like some answers. Today probably isn’t the right time to go into that in greater detail. The most important thing for everybody at the club is the game. But like every Rangers supporter, I would like one or two questions answered.”
This is as inspirational as his rallying call yesterday. Ally publicly demanding, like all of the supporters worldwide, some transparency in how we ended up in these state of affairs. Not trying to protect his own job, simply asking the question on the lips of so many fans – ‘how did we end up in this mess?’
What we have witnessed over the past few days is McCoist standing up, instilling pride in every fan, making us more proud than ever of supporting this great institution.
Tomorrow, a full house, and thousands and thousands more watching from afar will confirm that We Are The People.