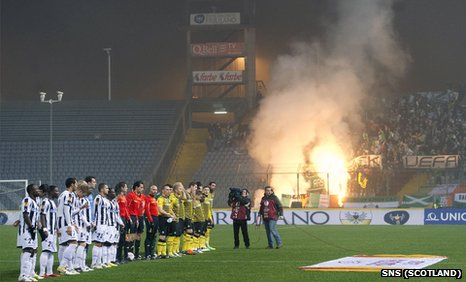 Rangers fans have had a long-standing axe to grind with the BBC, especially its Scottish headquarters situated at Pacific Quay. The issues with the corporation go back some years, and include incidents such as the website carrying a picture of Kevin Thomson which contained the hidden tag of ‘c*nt’ attached. It was later removed, but clearly someone had reason to imbue the image in this unprofessional manner. There was also the reporting from outside Ibrox of the Neil Lennon postal bomb and bullet threat, as if implying it was most definitely a Rangers fan responsible for such a heinous act.
Now, to get a sense of balance here, during the recent Uefa ‘illicit’ chanting charge brought upon Celtic, Reporting Scotland led gratuitously with said story as their headline. They could have ignored it entirely, or hidden it quietly among their sports section as a ‘minor’ story. But they led full-frontal with it. They also led with a story where Lennon condemned the Celtic fans who had lit flares and held a banner against Uefa during a Europa League match against Udinese. Indeed, they quoted Lennon’s harsh words against said individuals; “My only surprise is that they got the spelling right.”
So there is evidence which suggests that the BBC (Scotland) as a whole is not biased against Rangers, but instead has merely allowed its previously high standards to slip, possibly in relation to a theory I previously suggested in this blog https://www.ibroxnoise.co.uk/2011/11/internet-media.html.
It is quite plausible too that there are a number of key personnel in the corporation who possess positions of power and who, to put it bluntly, hate Rangers. This is not to propose that the whole of BBC Scotland has an anti-Rangers agenda, but just that particularly important people currently within the organisation who control its output are very much anti-Rangers. Just like within every organisation, there will be those who despise Rangers, and those who despise Celtic; it just seems one side may be dominating Pacific Quay’s output at the moment, with the occasional sway of balance evening matters up slightly.
In October last year, the BBC, and in particular, Mark Daly, BBC Scotland’s Investigations Correspondent, ‘uncovered’ evidence claiming that Rangers new owner Craig Whyte had not only been barred as a director for 7 years, but that he had illegally defied the ruling to continue as a director of a company called Re-Tex. It was claimed this was ‘criminal activity’ and that he could be jailed for it.
Rangers withdrew all co-operation from the BBC as a result.
The troubling issue was that Whyte later admitted he had indeed been banned from directing for 7 years ‘on a technicality’. This gave credence to the claims if not clarifying whether or not Whyte had broken the law.
However, on the 6th of February, Daly broke a brand new story, one which started to give the distinct whiff of a witch-hunt against Whyte. The headline was:
“Rangers owner Craig Whyte may have lied in court case”.
Leading with this as their headline act, Reporting Scotland featured a snippet of Daly’s investigations, later screened that night again on Panorama, which made the claim that the Rangers owner may have told a porkie in court. There were no factual and proven grounds to say the man did lie in court, just that he may have.
I am no journalist, nor am I an ‘investigative correspondent’, and I try to be fair regarding stories which paint Rangers in a negative light, despite my allegiances, but to lead with a story which merely makes a claim seems an extraordinarily tenuous piece of news. It is the kind of story which is expected from OK! magazine or some tabloid TV show about celebrity gossip, not a serious mainstream news broadcaster.
It also appears to be the kind of story which reflects a vendetta on the part of BBC Scotland in retribution to Whyte banning co-operation with them.
I personally disagreed with the banning – it effectively meant when the BBC covered a Rangers game on TV or radio, no one from the club could speak to the fans about it. It blocked off all insight from Rangers which fans need to understand various aspects about their club. That said, it is understandable why Whyte would take action; being accused of being a criminal hardly ingratiates a news agency to the subject of their accusations.
But to then lead with a gossip story about said individual is extremely unprofessional, poor practise, and nothing more than tabloid fodder. If this story had documentary proof that Whyte had lied in court, they would have a valid case. But that they only thought he might have done so is truly abysmal.
Further ire can be aimed over this topic in light of the fact that the BBC have in no way covered the story of a Celtic fan who allegedly slashed another at the recent Inverness cup tie. It did not make their website, nor Reporting Scotland. Nor did the associated assault relating to it. Instead, BBC Scotland explicitly focused on a claim about Craig Whyte.
The truth is no Rangers fan wants BBC Scotland, nor any other broadcaster to paint their club in a 100% positive light. We know the club is in financial trouble and results on the pitch could be much better. We do not require sugar coated news – just honesty and truth. And above all, fairness. So Whyte has banned the BBC – take it on the chin and continue to report factual stories, about whatever hard evidence shows proves. This route of reporting flimsy gossip under the guise of ‘investigative journalism’ fools no one.
As stated before, I do not buy into a media conspiracy against Rangers, but I openly accept individuals within organisations will have agendas and biases, just like we do too. The problem is when it affects their professionalism and leads to unfair reporting and blatant inaccuracies.
Is parity beyond partiality simply too much to ask for?