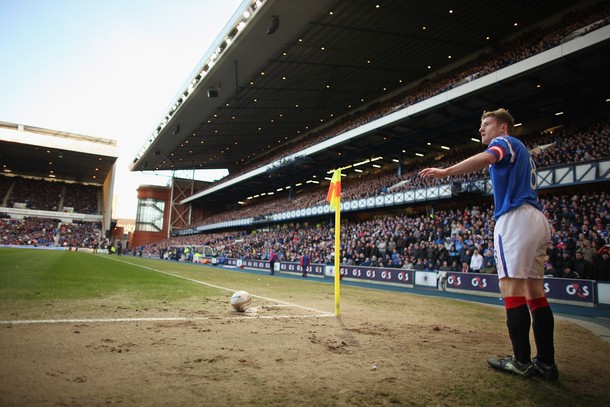 Ever since Rangers went into administration, there has been nothing but constant daily bulletins, news articles and tweets about the situation. Every source has been scoured, re-tweeted and nitpicked for the smallest nugget of new information. It has been a truly draining period for the club, but an even more draining one for the fans suffering the deluge of mass media pouring their way.
The supporters, as manager Ally McCoist put it, are the most important part of Rangers. The fan has had to endure the nightmare of their proud club entering into a slippery slope of operations, starting with the emergence of the debt to Lloyds TSB, struggling through the horrors of being owned by said bank and having no money to speak of. Tentatively mentioned at this time was the upcoming HMRC tax case against the club, but at that stage, it was a future issue and not crucially pressing despite the rumoured sum being £49M owed.
So when the club hit rock bottom and appointed administrators, it was the fans who felt it most. Of course the manager and those within the club who bleed blue undeniably hurt, but the supporters are the ones who live and breathe the club, the ones who put their money in, or if they cannot afford to, cheer the club on in whatever way they can. The agony of being placed in administration cannot ever be understated, and to many fans it was one of the worst feelings they had ever experienced.
However, the response of the supporter in terms of action was incredibly heartwarming, and this blog is dedicated to each and every one of us who did not for a moment consider packing the game in or ‘walking away’.
Twitter saw fans trending hashtags to the nature of #wedontdowalkingaway and #rangersfamily. There was a truly mesmerising pride being shown, and more and more fans came together in support for the club. It almost felt like the more the club suffered, the more the fans would rally around it. In times of darkness, the light is needed, and the fans shone like a beacon.
It has been repeated a few times that when Celtic crumbled in 1994, and Fergus McCann saved them, before their bunnet messiah had arrived Celtic fans boycotted their next home match in protest, meaning the attendance was around 10,000. For a club to be in dire straits and lose its support would be truly soul-destroying for players and staff, but the Ibrox support does not walk away and never will.
The hype surrounding Rangers’ first match since administration was staggering – the game was a complete sellout and Internet forums, social networks and other forms of communication were in meltdown to the nature of the fans turning out at Ibrox in force and supporting their stricken side at this abysmal time.
The atmosphere at the game was some of the best in years, more akin to a massive CL night than a bread and butter SPL match. It truly raised hairs on the back of the neck as fans refused to stop singing anthems in support of this club of ours.
Unfortunately, opponents Kilmarnock truly hijacked the party and highlighted the threadbare squad Rangers have right now, winning the match amidst another genuinely dire performance. It felt to some fans that the players had not shown up, and that the display had not matched the passion in the terraces.
That said, at full time the vast majority of supporters remained in the ground (the Subway Loyal still noticeably departing near the end) and applauded players who did not deserve it. A bad defeat yet the fans remained in defiance of the club’s plight and clapped the players off. Indeed, perhaps they were applauding themselves, not the starting 11, and why not? They deserved it given their passion and pride at sheer turnout on the day.
Times are bad at Ibrox, cuts may kick in with vengeance in due course, but with supporters like ours Rangers will never die.