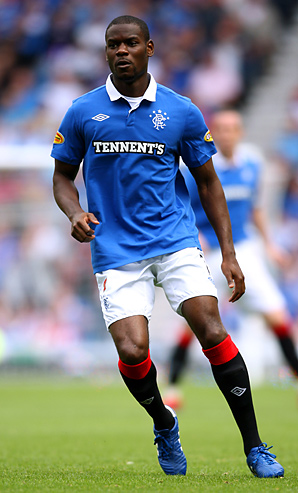 We are now on the 11th day of the January transfer window. There are of course 20 days to go till it closes, but the question on the lips of most Rangers fans is ‘are we bringing anyone in?’.
So far the speculation has been conspicuously dry. Unlike last summer following Craig Whyte’s takeover where an avalanche of potential targets drowned the media, forums and websites, there are a distinct lack of similar stories this time. The only real sum of conjecture has been a completely unknown Spanish striker plying his trade in Spain’s second tier ‘Segunda División’ with Real Valladolid, a former Rangers striker currently in ‘La Liga’ with Sporting Gijon, and St Johnstone striker Francisco Sandaza. There have been some other tenuous stories but none worthy of significant mention.
In the other direction, the two persistent stories have concerned two players held in slightly different levels of regard. One has centred, as mentioned in the previous blog, on Croat star striker Nikica Jelavic. His appearance against Arbroath did little to stem the tide of speculation regarding a potential departure, likewise a quote from a Croat newspaper where he, while stating his contentment at Ibrox, expressed his dream to play in England. The other player in question is US international Maurice Edu. Not always a fans’ favourite, the American has historically often, strangely, been linked with French clubs. Auxerre, Marseille, and now Sochaux have expressed interest, with the latter lodging a bid of £500,000, an amount rejected out of hand.
So, while fans ask ‘are we bringing anyone in?’, they accompany that question with the more pertinent puzzler ‘do we have any money?’. This is the key issue – with an ongoing dispute with HMRC looming large in the background it appears the club, while arguably more structurally stable than it was when owned by Lloyds, is no financially stronger and remains stricken when it comes to spending money. Indeed, Jelavic has made pretty damning comment on the issue:
“It is true the club [Rangers] is in deep financial trouble. Rangers have a debt of €50m and have several ways of reducing the debt. If they sold me it would help to get rid of the debt they have accumulated for years. There was talk about bankruptcy. Nobody at the club has told me I must leave, though. I still have a contract with Rangers for another two and half years. It’s for the owners to decide what will happen. But, as far as I know, the club must repay its debts by a certain deadline.”
Now quite how seriously you can take the word of a footballer on issues of club fiscal policy is a matter for debate, but that said, it is hardly the most endearing quote of recent times. And further highlights just how poorly the club’s finances are perceived right now.
It has been said that the only way Rangers will sign anyone this window is if players are sold, especially the valuable asset that is Jelavic. Manager Ally McCoist vaguely denies that is the case:
“I’ve had a couple of meetings with Craig [Whyte] and he did not say to me that we needed to get players out to get players in. Like any business, that would probably be his perfect solution but he didn’t say that to me and he is as aware as I am that we need to be strengthened.”
The key quote here is ‘he didn’t say that to me’ which clearly does not assert that we do not need to sell to buy. It just means Whyte did not say it out loud. Indeed, McCoist, diplomatically recognises that he is unlikely to buy unless he receives funds with the comment ‘that would probably be his [Whyte] perfect solution’.
All this makes for slightly depressing viewing for fans. While there are limited stories linking the club with players, admittedly not the most inspiring ones, the truth seems to be that in order to make any signatures, money has to come in first. And that appears, sadly, to be dependent on Jelavic’s departure more than anyone else.
It may be that there really are some small funds available for new players, and that a signing or two of the calibre of a Bocanegra, Wallace or Goian may be made without having to sell anyone (this would be no bad thing), but any supporter getting excited for a potential marquee signing or two is going to be badly let down.
The team is currently in patchy form at best. A recent improvement has not proven the side to be in recovery, and bringing in the kind of quality Rangers truly need to get back to consistently winning ways is incredibly unlikely to happen. This is further compounded by losing both Lafferty and Whittaker to medium term injury. Naismith is of course gone for a very long time, and Jelavic may not be at Ibrox much longer. Lastly if a large bid comes for Edu, the club may be unable to refuse.
There is of course the ‘backup’ plan – Matt McKay, Alejandro Bedoya and Juanma Ortiz were signed last summer but none made an effective impact, admittedly with minimal playing time. With the potential for few if any signings to be made, and the aforementioned loss of players, it is feasible that these unused players may finally get their chance to shine and prove their signatures to have been of benefit to the club.
It is not very exciting, it is not the overhaul the squad badly needs, but in these viciously frugal times at Ibrox, it may be the most economic solution.