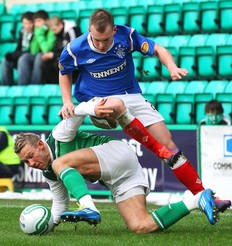 Opening up a 12-point gap in any league by November is a pretty impressive achievement to make. Rangers did that, albeit second-place Motherwell were 10 points behind, and Celtic, one point further back, did have a game in hand. Nevertheless, to ascend a double figures gap so early on in a campaign is worthy of significant praise.
Fast-forward to 12th December and that lead has dwindled to a mere 4 points, Motherwell long since falling away and bitter rivals Celtic establishing themselves in second place, 8 ahead of the Steelmen. So, what changed? What upset the pattern to reduce the lead by such a drastic margin?
There are 3 significant issues Ally has had to deal with over the past month-plus, and this blog entry will detail what they are.
First of all, arguably the most significant, was the injury to key player Steven Naismith. Out for a very long time, this blog has discussed his contribution in the past more than once, and few Rangers supporters would deny his loss was one of great gravity. He gave the side a huge amount of balance, poise, creativity, industry, drive and goals, not to mention his indispensable versatility which saw him occupy more than one position in a game. There is little point retreading this tragedy, previous blogs have expressed it more than adequately.
The second issue has been the decimation of the left side. 3 key players were deployed in the early portion of the campaign in this area of the pitch – Gregg Wylde, Sasa Papac, and Lee Wallace. It gave an effective balance with 2 dynamic full backs who could defend and attack and interchange with each other, while Wylde used his pace to get by men and his ever improving crossing caused all sorts of problems for defenders.
These 3 players were used as required depending on how a game’s required tactics dictated. Seeing Papac wide on the left against St Johnstone in Perth was initially baffling, but it emerged that this worked a lot better than one might have predicted and the Bosnian could fill in at LB when Wallace drove forward.
Fast-forward to St Johnstone at Ibrox on the 19th of November. Not a single player of the aforementioned 3 was available, so left back was Broadfoot, left wing McKay. Neither were suitable for their slot and the result was a truly abysmal 0-0 draw which saw a quite awful level of quality, bereft of balance and some players simply not at home in their slot.
With Papac still unavailable, the left side issue remains a problem. Wylde and Wallace have now returned, which reduces the problem somewhat, but the equation is not complete. Over the past month or so, the players available here have not been at full compliment. It is another of the issues McCoist faces.
The last issue is that of the defence. Bocanegra and Goian have formed an outstanding partnership – so for half of that combination to become unavailable for a period, coupled with the continuing problems at left back, defence has suffered a lack of consistency in recent games. The bedrock of any team is its defence – Celtic discovered this to their cost in the early season when they too were rarely able to field the same back line in consecutive matches. Rangers ended up in the same scenario as Autumn ended and Winter began to descend.
Bocanegra has returned and a clean sheet accompanied that against Hibernian, along with Wallace’s renewed availability.
A season does not last 2 or 3 months, it lasts around 9. Managers like Ally will encounter obstacles like the ones detailed above, and it is his job to find solutions to them, to manipulate, negotiate and traverse difficult terrain. If Rangers are to win the league, it is likely more problems will require hurdling for success to be achieved.
Ally has significant work ahead of him in the coming months to realise that.