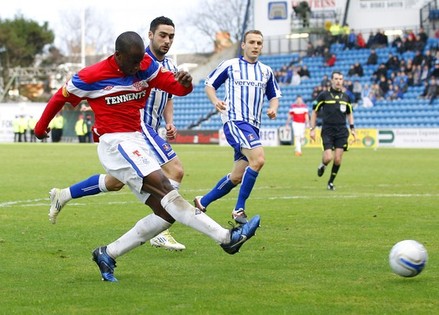 Ever since the loss of Naismith, as this blog has described in previous entries, Ally McCoist has had a job on his hands to find sufficient compensation to cover the work the Scottish international carried out. The 4-4-2 the manager relied on used Naismith to occupy potentially 4 different positions in a match, all while scoring as well, which also saw his opposite winger Wylde balance out the flanks with fast running and improving distribution from the left.

It has been a real head scratcher for McCoist, with some away matches featuring just Jelavic up front and using McCulloch to sit in front of the defence, and one notably poor home match with Bedoya and McKay occupying the wings. These were systems which simply did not work – the former saw the Croat struggle on his own while the latter deployed two unsuitable players on the wings. No width resulted, no penetrative wing play and very little in the way of quality distribution.

It was not for the wont of trying, but quite clearly, in an attacking sense, Rangers were struggling.

McCoist’s solution – signing the Nigerian international Sone Aluko, out of contract at former club Aberdeen. The African is a right winger, a pacy forward who is more than capable of goals. Some fans were sceptical about the ambition of this signing, while others were pleased that one of Aberdeen’s most impressive players had been snapped up by the Gers. There was certainly the conviction on all sides that this was indeed the player McCoist hoped could replace Naismith on the right.

His debut against Kilmarnock started promisingly – he ran at defenders throwing caution to the wind, and while he struggled to produce the killer final ball, the signs were there that he had potential to cause damage. The side lost the match when Aluko made a forward’s error of playing Pascali onside when a lofted ball gifted the Killie striker a header which found the back of the net. A bad result, and a bad match, but when Aluko made a darting run from wide to cut back a quality assist for Norwegian Bendiksen in the following match, a friendly against German cracks Hamburg, the fleeting signs from the Kilmarnock match grew ever further.

One component had been missing from all of this, that of Naismith’s counterpart on the left wing, Wylde through injury. He returned against Dunfermline, with Aluko occupying that right wing berth. So a 4-4-2 had returned and Aluko, Wylde, and Bendiksen (in his first SPL start) caused the Pars all sorts of problems. Indeed, for the first half an hour it was clearly the best the side had played since Naismith’s exit from the overall scene. Creativity was there, the wingers able to cause problems and the balance of Edu and Davis in the middle saw the American have one of his best matches in quite some time as well.

The performance levels did not last, however, and the latter period of the game saw Aluko fade out, Wylde struggle to keep pace with the game following his injury and Bendiksen begin to give the ball away more than earlier. Indeed, Dunfermline pulled a goal back and by the end of the 90 it was a case of hanging on.

However, had that first 30 minutes given Ally a glimpse of the system he could now use? It is not inconceivable that for the first match of this midfield/attack combination playing together there might be a slowing down following a bright first period. What is for sure is this 4-4-2 showed more than enough signs of having the attacking clout to cause any SPL team problems. While Aluko cannot do everything Naismith did, he can do things the latter could not. He is much quicker, on a par with Wylde, and is able to beat men with sheer trickery and skill. These are some of the few attributes Naismith does not possess in abundance.

Add to that the return of Wylde, the emergence of Bendiksen and there might just be a solution to the creativity problem at long last.

Unfortunately, it does not cover the patched up defence the side is currently relying on to keep attackers at bay, but that is another blog entirely.