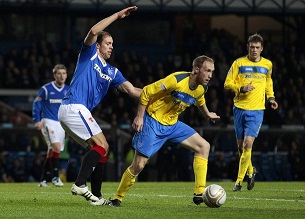 In a previous blog, Naismith’s enforced absence from the team was discussed at length, especially pertaining to the effect it would have on the team. Who could replace him, would the system be altered, and how might it affect morale?
In the three matches since his injury, including the fateful match at Aberdeen, it is not totally unfair to suggest the side has struggled a mite. Against Aberdeen it took a stunning ball from Bocanegra to be clinically dispatched by Lafferty, before a Jelavic penalty sealed the points. It cannot be disputed that the performance outwith these moments was perhaps not particularly bright.
Against Utd the team toiled badly till another moment of quality from Aussie midfielder McKay set up a thunderous diving header for Jelavic to set the Gers on their way, but the afternoon was not a comfortable one when Daly pulled one back for the Arabs. The points were sealed thanks to a Kenneth own-goal.
Fast-forward to yesterday’s dire match against Steve Lomas’ St Johnstone. The visitors must be credited with a buoyant display which even included taking the game to their hosts, but that said, the spark, invention, organised solidity, creativity and even watertight defence which have punctuated the majority of the season from the Light Blues were all conspicuous by their absence. Not a single player from the home dressing room can hold their head high (with the notable exception perhaps of substitute John Fleck) after a rather feeble and wistless match, and manager Ally McCoist must also take a substantial piece of the responsibility.
His responsibility, as previously mentioned, is to manage this team in Naismith’s absence, to adopt an alternative formation or system to cope with the loss of the vital contribution he makes, especially in the 4-4-2 setup.
The over-riding problem was Bedoya, while an honest enough individual, is not the same kind of player Naismith is. He cannot replace him in a like for like fashion – there is no one in the squad who can. This is of course not in any way to blame the American for yesterday’s mediocre 0-0 display elicited by the entire team, but it shows how McCoist has work ahead of him to find the right alternative system which suits the players he has now. Maybe reinforcements will be obtained in January to ease the burden, but for now, what system could be used?
There are many possibilities, but one involves bringing young Ness into the fray and adopting a three-man midfield alongside Edu and Davis. Using the fullbacks for width and using a creative player in the hole behind Jelavic and Lafferty – possibly Fleck, maybe Bedoya, or even Davis himself and using McKay in deeper midfield to replace the Ulsterman.
This, is mere speculation, and only the musings of one fan. Ally McCoist is the man shouldered with the responsibility of finding the right blend in the absence of Naismith (and, for that matter, in the absence of Wylde, Wallace, Papac et al) to compensate.
From what we have witnessed so far, he has yet to solve the dilemma. Let us hope, from an Ibrox perspective, that he conjures something relatively swiftly.